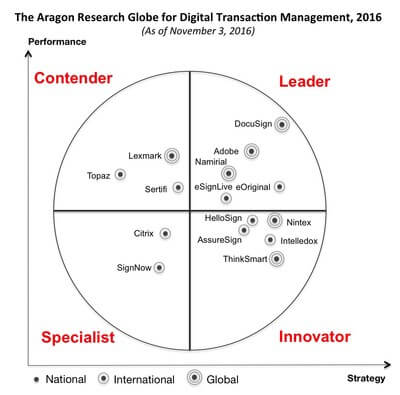 Namirial has made great strides in positioning itself as an international leader in the DTM market and a technology provider to consider for enterprises who want to simplify how they do business digitally.  Forrester recently published a report, “Vendor Landscape, E-Signature Q4, 2016”, by Craig Le Clair, This was the first Forrester report where Namirial was included as one of the assessed vendors and represents a significant step forward for Namirial.  The Forrester report is, however, merely a vendor profile update and did not endeavor to provide any relative ranking of the players.

Aragon Research published a subsequent report that took vendor analysis one step further providing a deeper perspective and ranking of the market leading vendors.  In that report, “The Aragon Research Globe for Digital Transaction Management: 2016” by Jim Lundy, Namirial was ranked in the leader quadrant and one of only three leading vendors with global presence.  It positioned Namirial ahead of all of the well known brands and only slightly behind Adobe and Docusign, neither of which provide biometric capability.  Biometrics are a must have capability for many European and International customers but not significant for the U.S. market where Adobe and Docusign have the majority of their business.  If this comparison were done solely on the strength of European requirements then Namirial would have been ranked as the #1 vendor.

It is clear, based on these recent research reports, that Namirial is the main vendor to consider when biometrics are an important decision factor and a short-list vendor to consider for any project whose objective is to transform paper processes to digital processes.